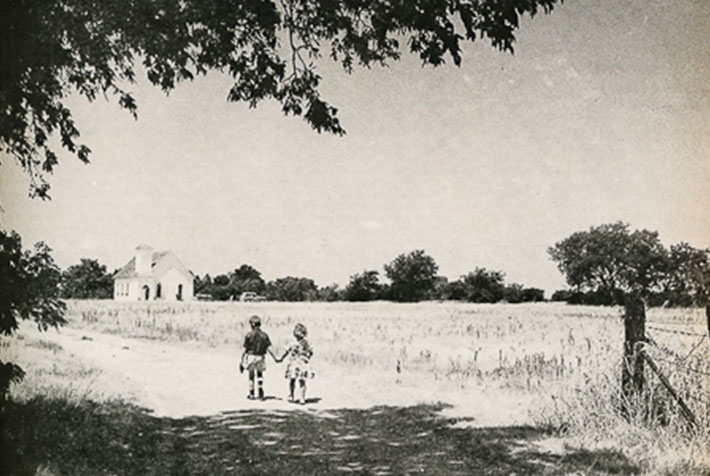 Hundreds of years ago Native Americans and buffalo beat out a wide path in Central Texas that started near Brownsville in South Texas. This dim “trail” which was several miles wide, led from the ranges of southern and southwestern Texas past Austin, Waco, and Dallas, eventually crossing the Red River through Oklahoma and on to Kansas and Missouri. At Dallas the trail cut a wide swath in the vicinity of present-day Preston Road. Hall’s Branch or Indian Springs, the tributary of White Rock Creek that runs through the Bent Tree and Frankford sites was on this route, which was called the Shawnee Trail.

A traveler heading north along the Shawnee Trail could find water in the Dallas area at two locations. These locations were Cedar Springs and Indian Springs at Hall’s Branch on the Frankford site. These springs provided cool water that quenched the thirst of many a traveler passing through. Native Americans, cowboys herding cattle to northern markets, and pioneers in covered wagons and their animals drank gratefully from the springs at Frankford. Photo: Indian Springs at Frankford.

Over the years the purpose of the Shawnee Trail evolved. Originally used as a Native American trade route, the trail later was used by soldiers, explorers, cowboys, and pioneers winding their way from places like Tennessee and Kentucky until they reached the Red River and started down the “Texas Road.” Photo: Map of the Shawnee Trail, courtesy of Texas State Historical Association Handbook of Texas.

In her book Lebanon on the Preston, Adele Clark cites the many different names of the trail through the years.

“Call it a buffalo trail,” she said. “Call it an Indian trail or a military road or the Austin Road. Or the Texas Trail, Preston White Rock Road, an immigrant trail, or the Divide Road. Or call it the Cattle Trail, the Shawnee Trail or the Kansas Trail. Or just call it Preston Road. By any name it is the oldest north south road in North Central Texas.”

The deep meadows, which surrounded the camping area at Frankford (the three acres west and across the creek from Old Frankford Church) made an ideal resting place for trail drivers to bed their cattle for the night. The Frankford community now refers to this meadow as “the Wagon Yard.” In May of 1859, the Dallas Herald reported that a drove of two thousand beef cattle had passed through Dallas pointing north and raising clouds of dust in town. One can imagine that members of the tiny community of Frankford felt the reverberation of the herds as they passed near their homes.

In 1852 a man by the name of W. C. (Captain) McKamy arrived at Frankford by covered wagon with his wife, children, and mother. In 1851 they left their home in Roan County, Tennessee, settling first in Wood County, Texas, finally moving further west to the Frankford area. McKamy family history says that W.C. McKamy had a contract with the Butterfield Stagecoach line to raise horses for the coaches. He looked for land that had springs and vast pastureland and bought a home and substantial mill on White Rock Creek from Peters Colonists, Jack and Tom Mounts. With his wife and small children, McKamy took possession of the home and property and began to improve it. He was very successful in the business of farming and raising stock, and soon accumulated a large landed estate of about 3,000 acres.

One of Captain McKamy’s enterprises at Indian Springs was selling firewood and water to the settlers heading west along Preston Road. Sometimes as many as 25 covered wagons were camped at the Frankford wagon yard. Some of the settlers who camped at Frankford moved on west but others stayed, bought land, and raised their families on land in the general vicinity of Frankford. Eventually there was a small community of about 80 residents. Some of the houses and farms were one or two miles apart, but the residents thought of themselves as a community and shared a blacksmith shop, corn mill, cotton gin, and a post office.

In 1872 the White Rock Masonic Lodge built a lodge hall on two acres on the northwest side of what is now the cemetery. This land already had a few graves on it when the Lodge Hall was built. This hall was a fraternal, religious, and educational center for miles around. The second floor was reserved for lodge meetings while the first floor was used for school and church services open to all denominations, but with the Methodists predominating.

The first known unmarked grave in the cemetery dates to 1862. It is possible that there are earlier burials in Frankford Cemetery and some speculation that Native Americans are buried there as well. In the mid 1880s the Southern Railway, known as the Cotton Belt, bypassed Frankford to build a depot at Noell Junction, which later was named Addison. Many of the homes, stores, the post office, and eventually the Masonic Lodge were torn down or moved and the town of Frankford became a memory.

In the late 1890s W. C. McKamy paid to build the current Frankford Church on land he had previously sold to the White Rock Masonic Lodge to replace a former church that was destroyed by a tornado mid-construction in the 1870s. The church held services when a circuit rider was passing through the area. Several denominations were represented but the main one was Methodist. Captain and Rachael McKamy were devout Methodists who held church services in their home during the early years of Frankford.

After most Frankford residents moved to Addison and other nearby communities many of them continued to bury loved ones at Frankford. Preachers continued to preach in the little church through the mid-1920s and the cemetery and church continued to be overseen by the White Rock Masonic Lodge. Every third Sunday in May lot owners decorated graves in the cemetery and had a Dinner on the Grounds followed by a simple service in the little church. In 1948 Frankford Cemetery Association was incorporated under the condition that a certain number of Lodge members serve on the Board of Directors. In the 1990s the FCA and White Rock Masonic Lodge parted ways giving the FCA total ownership of the cemetery, church, and grounds.

Church of the Holy Communion

Photo taken in the early 1960s. The little girl is Pharis Ann McKamy and the boy is Stubbs Davis.

In the early 1960s John and Alice Ann McKamy led efforts to start regular Episcopal services in Frankford Church. The new mission congregation, eventually named Church of the Holy Communion, met in the little church for over forty years until they recently built their own sanctuary adjacent to the Frankford site.

From the 1970s to the 1990s much of the land around what was left of the Frankford site was sold and developed as Bent Tree subdivision, golf course, and country club. The neighborhood of Bent Tree North soon surrounded Frankford Church, historic Frankford Cemetery, the creek with the everlasting springs, the windmill, and the adjacent fields. 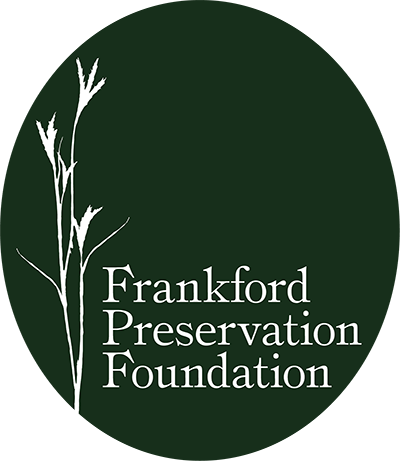